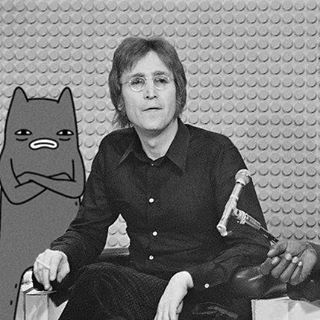 Right around the end of the magical ‘60s, there was a massive slaughter of geese that nobody really knew about. Those birds were being hunted and taken down like flies. There seemed to be a certain scientific study that implied the geese were somehow responsible for the mass hysteria about the war…but then again, they didn’t think helmets were necessary in hockey matches either back in the day…Anyway, good old John here felt like something should be done to stop the unnecessary killings, to end the mindless slaughter and the possible extinction of an entire species. So, he came up with a revolutionary song, a song for the ages, one that would change the course of history and influence the generations to come, for both humans and birds “Give Geese a Chance”. It would have been an absolute disaster, I know… Luckily, little Abel came by just as John was about to drop the hit name, and suggested a subtle, yet powerful change in the name. It quickly dawned upon John how “peace” instead of “geese” would make much more sense on a broader level. That moment of enlightenment is depicted here, and the rest is history.